From his place in eternity we remember 'Mr. Eternity' - a man inspired by something higher. 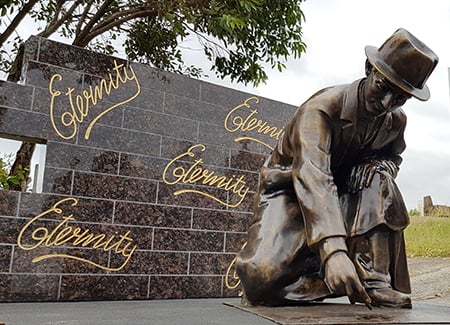 Mr Arthur Stace became a Sydney legend for chalking the word “Eternity” on footpaths across Sydney, spanning 35 years. In 2019, Eastern Suburbs Memorial Park dedicated a special Bronze Memorial for the 52nd Anniversary of his death, a significant date on which Arthur Stace entered eternity.

Born in Redfern in inner west Sydney in 1885, Stace grew up in poverty, stealing bread and milk and scrounging for scraps in bins to survive. At the age of 7, Arthur was given up to foster care by his Mother, and was sent to Goulburn where he spent the next seven years living with an elderly widow.  He attended school and had a basic education.

By the age of 14, Arthur was working in a South Coast coal mine. With his first pay, he went to the local hotel where he purchased his first alcoholic drink. By the end of that same year, he was carted off to jail drunk. Drinking became a habit, and soon enough Arthur was an alcoholic.

In his early 20's, he returned to Sydney living with his sister Minnie in a Surry Hills Brothel. Arthur worked delivering alcohol for a Two-up 'school' upstairs, and became a petty criminal as a 'cockatoo' or a lookout for a break and enter gang. In his own words, "I became a bad man."

Later he served in World War 1, and was discharged in 1919 after recurring bouts of bronchitis and pleurisy.

Despite these harsh beginnings, from 1932 to 1967 Stace went on to gain fame as a reformed alcoholic who converted to Christianity and spread his message of hope by chalking the word “Eternity” on footpaths in and around Sydney, to the suburbs and eventually country NSW before travelling to Melbourne.

Stace was inspired to what became his life’s working after hearing a sermon entitled "Echoes of Eternity".  At the end of the sermon, Rev John Ridley raised his voice and said, "Eternity! Eternity! I wish that I could sound, or shout that word to everyone on the streets. Eternity! Friends, you have got to meet it. Where will you spend Eternity?"

In an interview, Arthur Stace later said, “Eternity went ringing through my brain and suddenly I began crying and felt a powerful call from the Lord to write "Eternity".  I had a piece of chalk in my pocket and outside the Church, I bent down right there and wrote it."  To his astonishment, the word came out smoothly, in perfect copperplate. He had always struggled with reading and writing and never thought he could write or spell the word. Arthur believed it was a gift from God. Driven by the hope his message might inspire others to lead a better life, he wrote the word an estimated 500,000 times over his lifetime, on footpaths, railway station entrances and anywhere else he could think.

Two years after his death, his earthly remains were laid to rest with those of his wife at Eastern Suburbs Memorial Park. 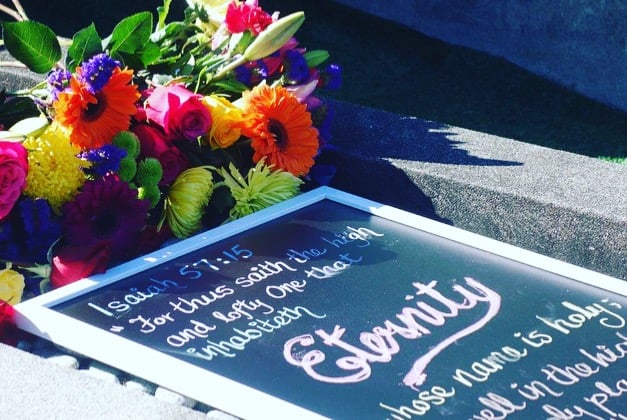 In 1999, at the start of a new millennium and as a fitting tribute to Stace, “Eternity” was emblazoned across Sydney Harbour Bridge as a part of Sydney’s New Year’s Eve celebrations.

On Friday, 28th July 2017 Eastern Suburbs Memorial Park held at intimate graveside service 50 years after Mr Eternity transcended to Eternity. Many of those present at the service took it in turns to write in chalk over the word Eternity from the passage from Isaiah 57:15 which motivated Arthur Stace to his great mission:

For thus saith the high and lofty One that inhabiteth Eternity, whose name is Holy; I dwell in the high and hold place, with him also that is of a contrite and humble spirit, to revive the spirit of the humble, and to revive the heart of the contrite ones.

Following on from the service, the footpath immediately adjacent to Arthur Stace’s grave has been installed with the word “Eternity”.