The Local Police Memorial has been created at Eastern Suburbs Memorial Park (ESMP), for those officers killed on duty within the Botany, Maroubra, Waverly and Rose Bay Local Area Commands. It was opened by NSW Police Commissioner, Andrew Scipione on Monday 30th November 2015. 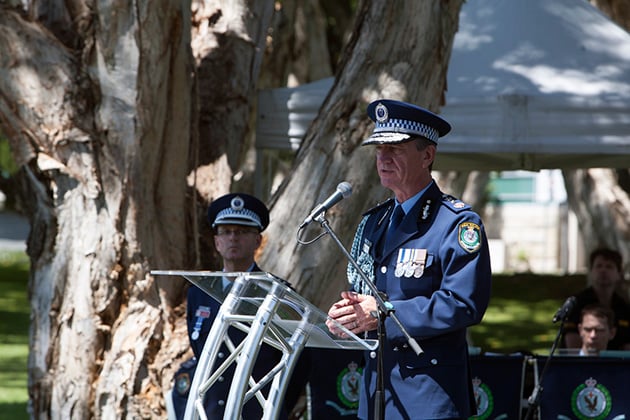 It is the second Local Police Memorial in NSW, the first being at Woronora Memorial Park (WMP).

The NSW Police Memorial at ESMP is a joint project of Southern Metropolitan Cemeteries NSW and the NSW Police Force. NSW Police Commissioner Andrew Scipione said the memorial would “stand as a beacon of hope, a beacon of sacrifice and commitment, from the police force to the community.”

We acknowledge the tremendous support that is provided to families by Police Legacy. Thank you to Police Legacy for standing ‘shoulder to shoulder’ with families in adverse circumstances, standing where those police officers who died would have otherwise stood. For the spouses, family, partners, friends and children the community remembers, and will always remember that the cost of service is sacrifice, not only for those who die, but also for the spouses and children left behind.

A major driver for the Police Memorial at ESMP came from Mr John Morrison OAM, former Police Officer and Divisional Commander, former Mayor of Waverly as well as the former long standing Chairman of the ESMP. John’s daughter in law, Mrs Jenny Morrison, took part in the opening ceremony and dedicated a plaque in recognition of John’s commitment to the NSW Police Force.

“My command is this: Love each other as I have loved you. Greater love has no one than this: to lay down one’s life for one’s friend. This is my command: Love each other”. John Chapter 15.

This memorial reminds us of love and the cost of laying down one’s life in the Police service.