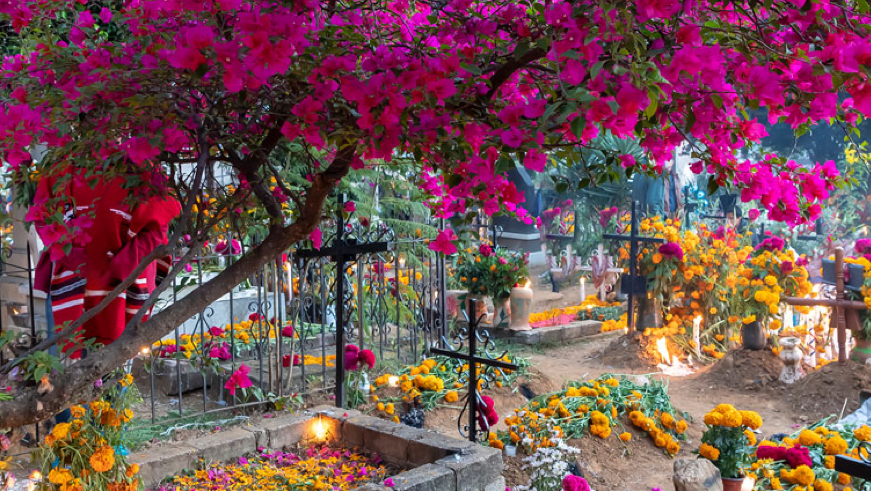 Day of the Dead celebrations date back to the Aztecs, and are characterised by brightly coloured costumes, decorative skulls and exciting, rhythmic music.

Whilst Día de Los Muertos is a national symbol of Mexico and many other Latin American countries, it also appears outside of Latin America. Each culture draw from their unique traditions and customs on this important holiday.

Though we come from different countries, death will always be the great unifier.

On this day, the border between the living and the dead dissolves, permitting souls to visit relatives for a limited time.

Families create a Day of the Dead altar in their home with items and photos to draw the spirits of the deceased. Mexicans demonstrate their reverence for the dead by decorating and exchanging sugar skull candies and figurines.

Taking place on November 2, this is a festive occasion to celebrate deceased relatives whilst enjoying a family feast. Ecuadorians enjoy colourful pastries, such as the guaguas de pan, made in the shape of a baby.

On the first of November, locals gather to fly giant kites in honour of loved ones. This tradition dates back thousands of years, as the indigenous people believed kites were used to communicate with the dead.

This October 31 holiday marks the end of harvest season. The Irish once had a number of traditions and customs designed to ward off evil spirits, but today, Ireland has left most of its pagan roots behind. Instead, they celebrate Halloween in a similar way to the American tradition. Foods and drinks like cider beverages, fruit cake, and sweets are enjoyed.

On November 1st and 2nd, Haitians engage in dancing, singing, rituals, and feasting in honour of the Voodoo spirit related to death and fertility. Death and birth symbols feature prominently at cemeteries, family events, and religious sites.

In Early November, people participate in the indigenous tradition of honouring the dead by dressing up like skeletons and parading through the city with torches.

Today, La Calabiuza celebrations have become a way to honour the indigenous culture and reject the influence of Spanish colonization.

This day is all about Brazil’s Catholic influence rather than celebrating the dead. Brazilians attend Catholic mass and pray. Families join together to read prayers and honour deceased loved ones.

This is primarily a religious holiday day, Spaniards attend church, pray amongst family members and visit cemeteries. Families come together to enjoy the delicacy of huesos de santo.

A day in early November for Hindus to connect with ancestors. Hindus pray for the souls of the deceased, to keep them at rest for another year.

Hindus believe that this is the time of year when the souls of the dead come to earth. If the spirits aren’t appeased, they’ll linger in the human world.

This is a time of the year for joining together with family. During this 2-day celebration, Filipinos light candles, clean cemeteries, and honour deceased relatives.